Have You Met Lester and Arlene Yet?

In the first few days in my role as assistant director at the Osher Lifelong Learning Institute at Towson University, I had several people ask me the same question: “Have you met Lester and Arlene yet?” A short while later Lester and Arlene were the first Osher members that I had the pleasure of meeting. I immediately understood why my colleagues were excited for me to meet them. And, thereafter, I wanted everyone else to meet them too. What struck me about both Lester and Arlene is their collective warmth and sense of humor—a willingness to laugh at themselves and the world while including you in on the joke. Lester can be described as a “character” but that belies his professional accomplishments of which there are many. Despite or perhaps because she grew up as a shy, only child, Arlene became an ebullient and nurturing person, exuding warmth and knowing exactly what to say to make people feel special. 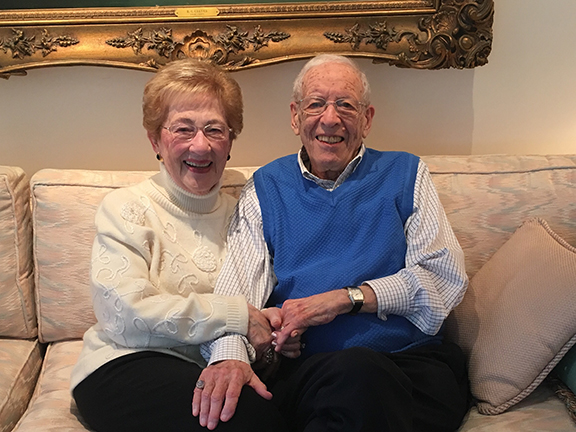 Lester and Arlene Caplan are charter members at Osher, having joined the organization when it was the Auburn Society in 1999. As a membership organization, Osher relies on the efforts of member-volunteers to help support programming with their work on committees. Arlene is co-chair of the Social/Hospitality Committee and Lester heads up the A/V Computer Technology Services Committee. At nearly 92 years old, Lester is defying the stereotype of the non-tech savvy senior while Arlene is the friendly face that greets Osher members when classes are in session.

The second marriage for both, Lester and Arlene just celebrated their 35th anniversary together. They each have weathered the trials and tribulations that life has to offer such as illness, divorce, the death of a spouse, and the loss of an adult child to cancer. I could spend days talking with them and not get bored with their take on life and the stories they have to tell.

A veteran of World War II, Lester served in the Army where he had jobs as radio repairman and telephone linesman in Okinawa despite his fear of heights. Upon his return to the states, he studied to become an optometrist. He spent 30 years in private practice in his hometown of Baltimore. He also served as a consultant to the Indian Health Services in their implementation of optometry services for Native Americans. Later, he transitioned into academia by becoming a professor in the School of Optometry at the University of Alabama at Birmingham. In 2011, he was inducted into the National Optometry Hall of Fame. Arlene was a school teacher before becoming a stay-at-home mom for 15 years. After becoming a single mother while at the same time battling cancer, she made the decision to get a Master in Social Work so she could become a counselor/social worker—a decision that she says was one of the best of her life, second only to marrying Lester.

Lester and Arlene agree that the social engagement that Osher provides is the most valuable aspect of their participation. Neither was lacking in friends prior to joining Osher, but according to Arlene, it’s important to keep making new friends as one gets older and faces loss in this stage of life. She says, “we have formed a group of friends in 16 years at Osher who we consider lifelong friends…The lifeblood of getting old gracefully is having people to relate to.”

Both also agree that maintaining their intellectual curiosity and keeping involved in what is happening in the world have enabled them to remain vital and vibrant as they’ve grown older. It’s clear that Osher Lifelong Learning Institute at Towson University is very important to them—and they are important to Osher. If you have the chance to meet Lester and Arlene, you’ll be happy you did!