Medical Staffing Shortage: A Case of Supply and Demand For my first blog post, I thought I would delve into something that is not only relevant to Maryland’s healthcare system and economy, but also significant on a worldwide scale: medical staffing. There is a major global shortage of healthcare workers, and one that will become more severe as the population grows and ages. The World Health Organization has estimated that by 2035 there will be a global deficit of 12.9 million skilled healthcare professionals, compared to a 2013 shortage estimate of 7.2 million.

In the U.S., the Census estimates that the number of Americans aged 65 years or older will increase from 47.8 million in 2015 to 65.9 million in 2025, meaning that there will be even more demand for health services. In 2010, this group comprised 13 percent of the population, yet accounted for 34 percent of healthcare spending. Healthcare provider shortage estimates vary by state, but there is a consistent theme—the number of workers entering the field will not be enough to meet the demands of an aging population. According to the Bureau of Labor Statistics (BLS), there will be roughly 3.2 million open positions for “Healthcare Practitioners and Technical Occupations” between 2014 and 2024.  By 2020, the Association of American Medical Colleges estimates that there could be a shortage of 90,000 physicians.

More locally, a quick search on the Maryland Workforce Exchange produced 951 open positions for registered nurses (RNs) in the state. Though not nearly as high as RNs, other occupations showed numerous openings as well—45 listings for physicians, 49 for physician assistants, and 56 open positions for nurse practitioners. In addition to these more well-known professions, health technologists and technicians (group including dental hygienists, diagnostic radiology technicians, pharmacy technicians, etc.) will have an estimated 1.0 million positions open nationally between 2014 and 2024. Long-term care jobs, including home health aid workers, are increasingly difficult to fill. Low wages and high turnover rates of more than 60 percent have added to the shortage, and the BLS estimates that there will be a national need for an additional 1.1 million workers in these positions by 2050. This is a crucial group of providers who perform challenging work, and can serve as a bridge to allow older individuals to stay in their home rather than moving to assisted-living facilities.

So what can be done to turn the tide? There is certainly no easy solution, but awareness of the situation is growing. In addition to producing more skilled healthcare graduates, new technologies in telemedicine show promise for reaching more patients, particularly those in underserved rural areas. While telemedicine has the potential to alleviate some of the burden for physician shortages, in many occupations there is no good substitute for human care. 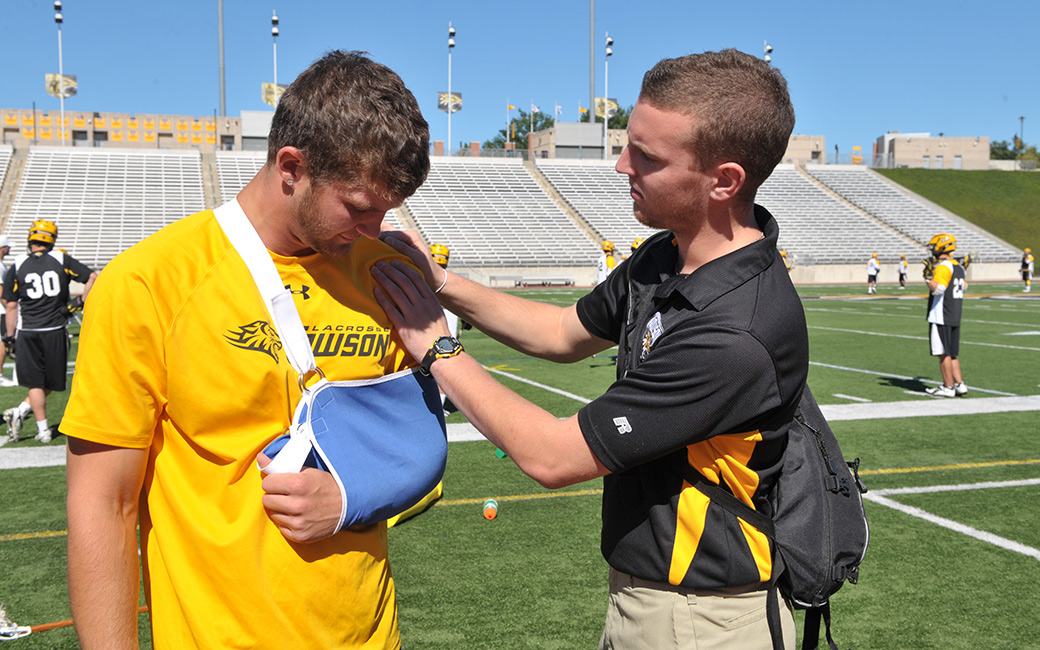 Managing and providing care to student athletes is part of the high intensity education of athletic training majors in TU’s College of Health Professions.

As a former healthcare professional, I am acutely familiar with the strains and pressures that can accompany these occupations. Schedules are rarely 9–5 (shoot, having Christmas off is a major win), emergencies are a given, and there can be a significant emotional toll from the things that we see. But, these positions can also be incredibly rewarding by allowing you to impact individuals’ lives in a meaningful way. If you are thinking about venturing into the healthcare field, check out opportunities through Towson University’s College of Health Professions and Graduate Programs in healthcare.