Usually when I watch television I channel surf during commercials.  I feel like advertisements constantly compete for my attention, so when I have the power to avoid them altogether I make sure to take advantage.  However, over the past year Verizon and AT&T successfully caught my attention with commercials that feature maps comparing the providers’ 3G networks.  What was so interesting about these commercials is that the maps being compared in the commercials never seemed to be the same.  I was left wondering: Are the providers using different data collection units (e.g. counties vs. census tracts), different variables (e.g. download speed vs. availability), or a combination of different techniques to create the different maps? These questions underscore the need for a single map showing the coverage areas of each service provider in a given area.

For much of the summer, interns associated with CGIS and Salisbury University’s Eastern Shore Regional GIS Cooperative (ESRGC) have been validating data from mobile wireless broadband providers by testing upload / download speeds at 1,472 locations across the state.  Upload / download speeds are tested using four cell phones, each equipped with the Android operating system, and associated with the different mobile broadband providers (AT&T, Sprint, T-Mobile and Verizon).  The locations were identified by creating a 4km2 grid of the state, and creating points at the intersection of the grid squares.  The routes the interns follow for a given day are created using ESRI’s ArcLogistics program, which designs a route tailored to the length of the workday, the time spent at each location, and the number of unverified points remaining.

As the data is being collected and verified, the CGIS development team has been busy creating the on-line mapping application that will make the broadband data available to the public. Users will be able to indicate an address and the application will return a list of the broadband providers and service technologies available. Users will also be able to report non-served areas and map errors, and take the speed test. The mapping application is scheduled to launch in early September.

Visit http://www.mdbroadbandmap.org/ for more information regarding the Maryland Broadband Mapping Initiative and to test your connection speed. 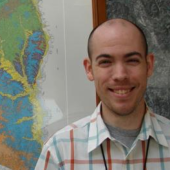