Snow Isn’t the Only Thing Accumulating in Maryland 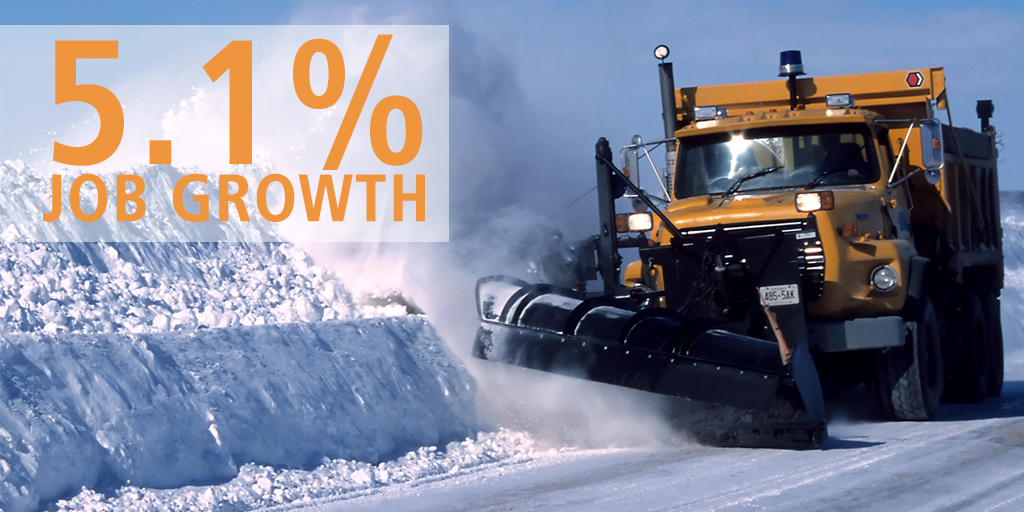 At the beginning of 2015, estimates for total jobs by the end of year appeared minimal with little gain. However, as the year continued, jobs began accumulating faster than expected. In April, Maryland reported a total accumulation of jobs month-over-month to be 16,300. The latest totals are not nearly as high as April, but a respectable amount overall. Although the release may have been lost in the drift of other news stories in the region, Maryland did report a gain of 10,500 jobs in December. Since December of 2014, Maryland has reported a preliminary job gain of 54,900 jobs. A steady increase over the past months have made this accumulating total significant for Maryland’s economy. From November to December, the latest employment report melted previous worries about job growth adding 10,500 jobs to Maryland’s economy. The large precipitous payroll additions by the private sector provided extra footing for a sunny outlook heading into 2016.

Over the course of 2015, Maryland’s economy has reported record totals within the private sector payrolls. December’s estimates are forecasted to be the fourth largest of the year for month-over-month gains. The industry with the largest surge of employment, Healthcare and Social Assistance, continued as one of the strongest performing sectors in Maryland. Adding 4,300 jobs from November to December, the Healthcare and Social Assistance sector remains on track to be one of the largest growing sectors in Maryland for 2015. Since December of last year, the industry has added nearly 10,800 individuals to payrolls. Comparatively, the Professional, Scientific, and Technical Services sector added nearly 8,800 employees to payrolls since December of last year. However, this sector does pose some chilling concerns given the small gain of 100 jobs in December. There was one sector that no one predicted would add to payrolls last year, Administrative and Support and Waste Management and Remediation Services. The sector added 800 jobs from November to December in 2015. However, as reported by RESI earlier in the year, the jobs may have been transitionary employment as individuals waited to plow into their careers. Overall, this sector increased by 2,900 from December of 2014.

Despite the overwhelming growth, some industries remained adrift during 2015. Sectors such as State Government reported a decline in payrolls of nearly 1,000 individuals since December of last year. Digging deeper to look at the month-over-month job changes, December indicated State Government cut 100 jobs. Despite the best efforts to regain footing in a slippery financial market, the Finance and Insurance sector reported a loss of 600 to payrolls since December of 2014. December did tie for the second largest month-over-month accrued jobs to payrolls within the Finance and Insurance industry since August, adding 900 jobs. Finally, an industry that appears to be frozen since December is Wholesale Trade, with no marginal additions from December 2014 to December 2015. Any gains throughout the year melted away in December, with a loss of 100 jobs month-over-month for the industry.

The potential change in the seasons of economic growth may be looming for Maryland in 2016. Performance by the key sectors of healthcare, accommodations, federal government, and education more than exceeded forecasters’ expectations in 2015. The solid performance of these sectors in terms of payroll additions provides a solid base for 2016, with room to continue growth. The surprise of 2015 was the Manufacturing sector, which added nearly 1,300 jobs to payroll totals since December of last year. As Maryland has thawed out from a slow employment growth economy, many look to the potential for another big chill in smaller industries such as Management of Companies and Enterprises, which reported a loss of 500 jobs by year’s end. The flip-flop of the Manufacturing sector and Management of Companies and Enterprises, employment trends gives economists something to ponder on their snow days. Early forecasts for these sectors may have been premature, or 2015 could be an anomaly for payrolls. No matter the situation, the expectation remains that December’s revised estimates will provide a better picture of this historic change in Maryland’s once chilly employment totals.