When I retired many years ago after 31 years of teaching, I really thought that I had taught my last class. But, this past semester, I found myself once again in the front of a classroom—this time teaching a course at Osher Lifelong Learning Institute at Towson University.

That surprising turn of events happened because I read an article in Smithsonian magazine entitled “Slavery’s Trail of Tears.”

I majored in U.S. History in college. And, I know about the original “trail of tears” when the federal government forcibly removed Indians from the southeast to reservations beyond the Mississippi River. But, before I read that Smithsonian article, I knew nothing about the million slaves that were forcibly relocated in the 19th century. 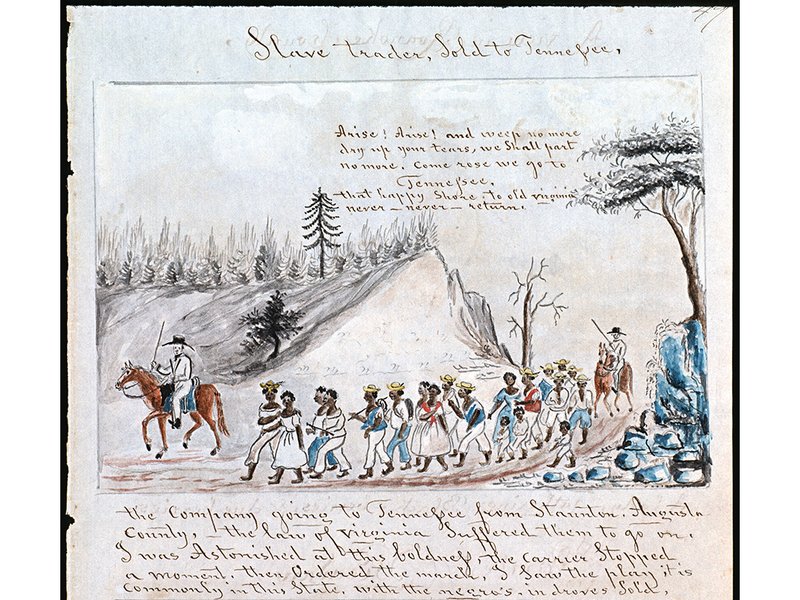 A coffle of slaves being marched from Virginia west into Tennessee, c. 1850.

Some months after I read the Smithsonian article, my husband pointed out an item in the New York Times about 272 slaves that were sold in 1838 by the presidents of Georgetown College (what is today Georgetown University).

Those 272 Georgetown slaves were a part of “slavery’s trail of tears.” They were some of the million men, women, and children from Maryland, Virginia, and the rest of the Upper South who were moved to the cotton plantations and sugar cane fields of Alabama, Mississippi, and Louisiana.

Those articles really bothered me because they described a migration that I knew nothing about. When I realized that a lot of other people of my generation were ignorant of it as well, I set about preparing once again to teach.

I read probably a hundred books, journals, and primary source documents in preparation for my class. Eventually, I decided that rather than dealing solely with the 19th century internal slave trade, I would focus my class on an area of the country with which I have an intimate connection—Maryland’s Eastern Shore.

I was born on Hoopers Island in southwestern Dorchester County where my family has lived for more than 350 years. Some of my ancestors owned slaves. They treated slaves like property; used slaves as collateral for loans; freed some of their slaves; and, in at least one known case, had a slave run away. Some of my ancestors also sold land to a free black and became his next-door neighbors. That part of my past influenced both the content and the title of my class: “Free Blacks and Slaves on Maryland’s Eastern Shore.” 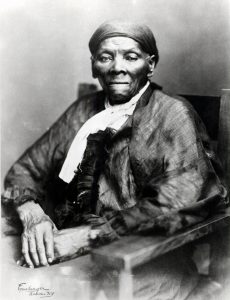 Classes at Osher Lifelong Learning Institute at Towson University sessions run for four weeks, with each class lasting one hour, fifteen minutes. I divided my content this way:

In our classes, we read records from the Maryland General Assembly, wills, deeds, inventories, bills of sale, memoirs, and speeches. We looked at maps and analyzed graphs and statistics.

In each class, my students met people from my past—Henry Hooper, who owned plantations in both Calvert and Dorchester Counties; the 2nd Henry Hooper, whose inventory at his death in 1720 included 12 slaves and a mulatto indentured servant worth £320; Hannah and Jhonah, who were equated with cows and furniture when Matthew Travers sold them to his son-in-law; Polly, who was used as collateral for Elizabeth Travers’s $117 loan; Emory Parker, who freed Nell and her young sons Daniel and Jacob; and, Thomas Bishop, who was not only freed but also given the right to vote.

While my students in this class learned much about slavery and the treatment of free blacks on the Eastern Shore of Maryland, we didn’t try to answer the biggest question of all. What is it about us that makes it possible for one group of people to destroy the humanity of another?

In 1847, William Wells Brown, a fugitive slave whose freedom had been purchased by a British couple, wrote: “Slavery has never been represented; Slavery never can be represented.” Maybe he meant that the biggest question of all has no answer that we are willing to face. 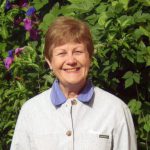 Jacqueline Hedberg taught history in Baltimore County and for the Department of Defense in Germany and Japan. Since retiring, she has spearheaded the restoration of an historic graveyard on Hoopers Island, where she was born, and has written extensively about her birthplace. Her most recent book, Hoopers Island’s Changing Face (Arcadia), was published in 2016. She has lectured at the Maryland Genealogical Society and the Dorchester County Historical Society. She is a charter member of Osher.