Not-So-Great Expectations: The Economic Consequences of Political Expectations in the U.S. Gun Industry 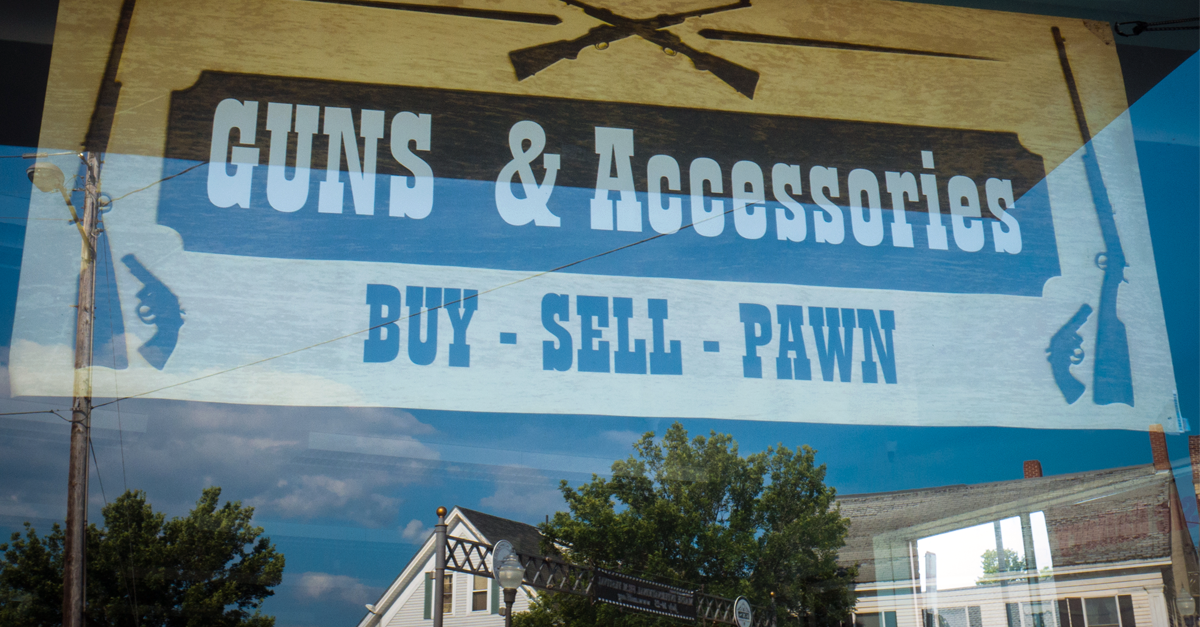 Even if you don’t follow business news in the United States all that closely, it’s hard to escape the idea that there are still a lot of companies declaring bankruptcy despite the current strength of the economy. While Toys “R” Us has dominated the news in that regard, another major bankruptcy this past March was that of Remington Outdoor Company, a firearm manufacturer that has been in business in the United States for over 200 years. While these events are rarely happy for anyone involved, they do offer an opportunity to better understand why certain businesses are struggling though the country as a whole experiences steady growth. In the case of Remington and the larger gun industry, it’s an opportunity to observe how political expectations—our beliefs on how things will turn out both at the ballot box and in our legislatures—drive economic decision-making.

A good way to see this effect visualized is to look at the stock market. After all, the stock market is a world in which prices are set entirely based on expectations, where a share is only as valuable as investors think it will be tomorrow. These can be expectations created by the present, relying on fiscal reports, news headlines, and other indicators of current performance. They can also be expectations of the future, based on how investors believe the market for a given company will evolve. In the case of the firearms industry, these future expectations include predictions of the political situation.

This is made immediately clear in the stock price of companies like American Outdoor Brands (AOBC), which owns Smith & Wesson. On the day of the 2016 election, a share of AOBC was trading for more than $28 a share, which was within a couple of dollars of its all-time high. In the two days following election night, AOBC stock lost 25 percent of its value, tanking to $21 a share in only two days of trading. Expectations for the company had taken a strong downward shift, in a very brief amount of time. While changes in a stock price over time can be attributed to a variety of factors, there was no doubt that this drop in price was caused by the election. 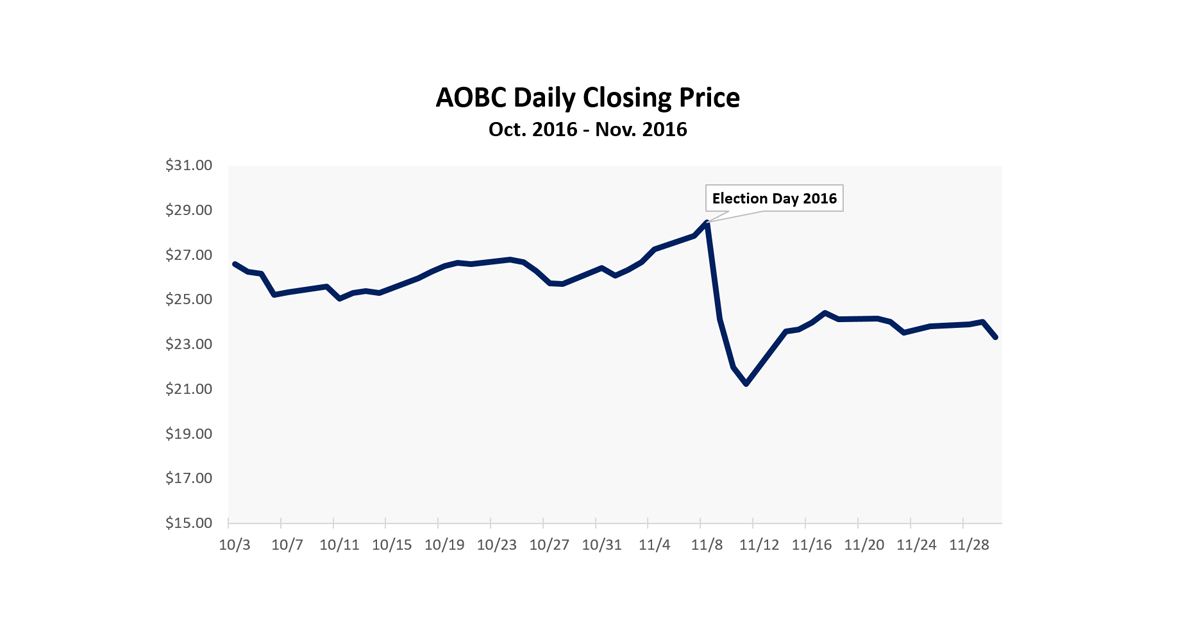 Why would the election of Donald Trump create negative expectations for the future of gun manufacturers? After all, Trump received the endorsement of the NRA and took weaker positions than Clinton on a variety of gun control issues. His platform stated outright that “The government has no business dictating what types of firearms good, honest people are allowed to own.” Unfortunately, for these manufacturers, a political win for gun advocates and the NRA turns out to not be a win for their business.

During the eight years of Barack Obama’s presidency, one of the major drivers of gun sales was the expectation of gun control regulation, creating an incentive to buy firearms while it was still legal to do so. In the below chart, created by Bloomberg, we can see how federal background checks spiked at the moments when those expectations were at their highest, which is immediately following major events of gun violence in the United States. (Since official figures for gun sales are not available, federal background check data from the FBI is used as a proxy for people looking to purchase firearms.) As a further example of gun sales being driven by politics, you can also see that background checks during the election of Barack Obama spiked higher than at any point during the administration of George W. Bush. 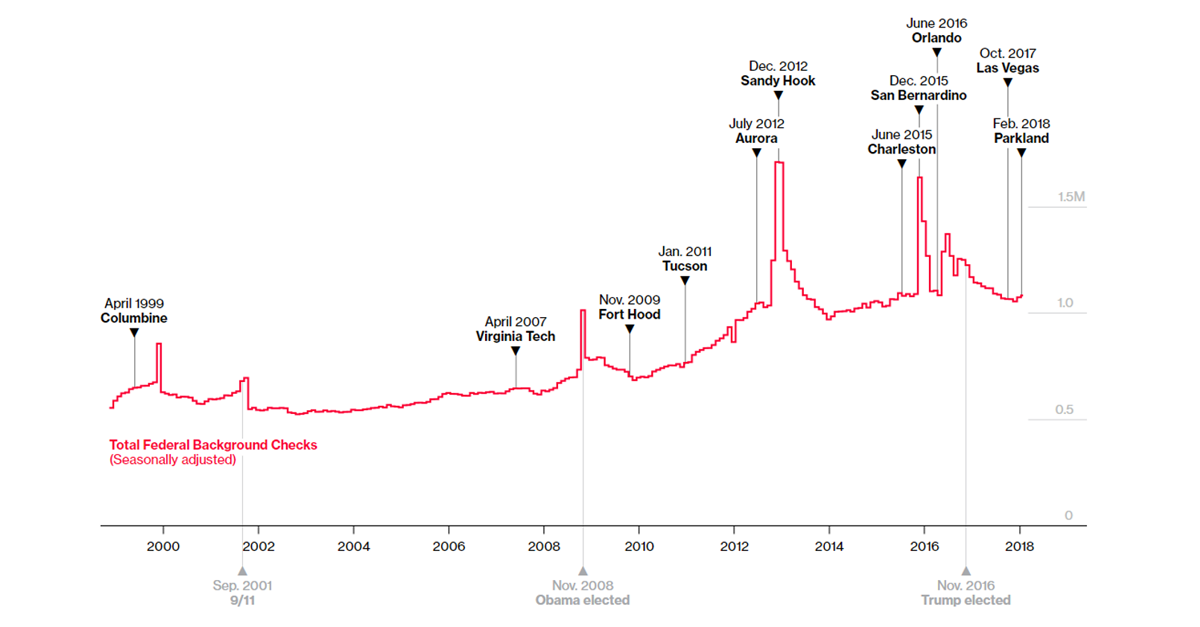 This incentive to purchase firearms has all but disappeared with the election of Donald Trump. In an earnings call following the second quarter of 2017, American Outdoor Brands CEO James Debney laid out the issue, stating “There was some fear-based buying that would take place from time to time. There is no fear-based buying right now.” Even as mass shootings continue to happen, the effect of these events on gun sales has been muted without an expectation that gun control legislation would occur as a result. As seen above, there was no jump in federal background checks following the Las Vegas shooting in October 2017. While there has been some effect following the Parkland shooting, increases in sales have been limited primarily to Florida and other states that have pursued stronger gun control measures.

Economic decisions have also been driven by political expectations on the manufacturers’ side of the equation. Prior to the 2016 election, gun manufacturers increased output with the expectation that Hillary Clinton would win the election and pursue tougher gun-control laws. When that outcome didn’t happen, these companies were left with excess stock and reduced demand, forcing deep discounts from retailers just to move guns off of store shelves. This bad bet has exacerbated the issues from low sales, resulting in Remington Outdoor Company’s declaration of bankruptcy this past March.

These types of decisions are not uncommon in business. Ultimately, everyone is trying to make decisions based on expected future outcomes, whether that means changes in future demand, the shifting price of oil, or new tariffs that affect the ability to buy and sell from the global marketplace. In the case of the gun industry, where past sales have been driven heavily by politics, decisions were made based on political predictions that did not end up coming true. However, with American politics generally working in cycles, it likely won’t be long until buyers’ expectations change and sales pick up again. As a result of these few hard years, the American gun industry might learn not to place too large of a bet on an uncertain outcome.