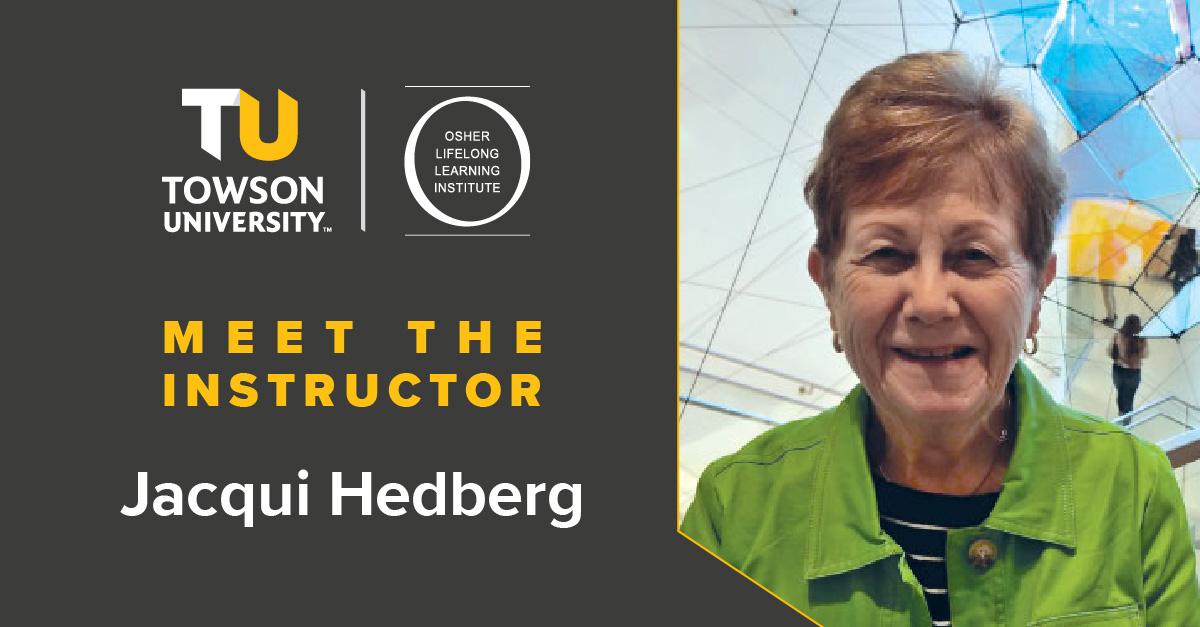 Jacqueline Hedberg taught history in Baltimore County and with the Department of Defense Overseas Dependent Schools in Germany and Japan. Since retiring she has spearheaded the restoration of an historic graveyard on Hoopers Island, where she was born, and written extensively about her birthplace. In 2017 and 2018 she taught a class for the Osher Lifelong Learning Institute at Towson University about free blacks and slaves on the Eastern Shore. Her lessons were published by The History Press under the title Plantations, Slavery & Freedom on Maryland’s Eastern Shore, and she subsequently has made presentations on this topic throughout Maryland.

How have you been involved in the Osher at Towson University program? What are a couple of your favorite things about being a member in the program as well as teaching in it?

I’ve been involved with the Osher program for 20 years. I’m a charter member—I took classes from the very beginning, so I’ve been a student, as well as a teacher. This fall will be my second class as an instructor. I’m a volunteer, doing whatever needed to be done, and I’m currently the secretary of the Advisory Board. So I’ve been with Osher for a long time in a lot of capacities.

I think there are two things about Osher. The first one is the quality of the classes: I’ve had some absolutely marvelous classes where I’ve learned about things I had no idea about, and the instructors are good and know what they are talking about. The other half of it is the members—this is a group of people who have done a lot of different things in their lives. They’re interesting to talk to, they have great hobbies, they’re compassionate people—those two things put together have made Osher the perfect spot for me.

Prior to your retirement, what kind of teaching experience did you have?

I taught for 30 years in Baltimore County Public Schools and for the Department of Defense Overseas Dependent Schools. I taught in Germany first, then Japan. Almost all of my teaching was world history, even though I majored in U.S. history in college. I fell in love with world history after I got my first job, and it became my thing for 30 years. I have also taught classes in U.S. history, political-economic philosophy, and Asian affairs. I would say in the last five years, my interest has returned to U.S. history, starting with the slavery class that I taught and now the one I’m working on with Reconstruction.

My first job was with Hereford High School. I taught 10th graders world history. They were marvelous and it was a great experience. I loved every minute of it!

How did your career progression and teaching overseas influence your worldview? Did you notice any changes in the way you approached teaching after that time you spent with the D.O.D. and overseas?

Well, it made me a better teacher—I don’t think there’s any question to that. I had a wonderful principal at Heidelberg High School, and he was very bright and he also thought that I could do anything, I think. He thought that about a lot of his teachers, and he really pushed us to be better at what we did. In addition to that, I traveled. So, I got to see all of these places that I was teaching about. I teach about the Egyptian pyramids; I’ve been to the pyramids. I teach about ancient Greece; I’ve been to the Acropolis. By the time I finished my ‘tour of duty’ overseas, I had been to every single place that was important in my curriculum with the exception of a place in Iraq called Kirkuk that is in the center of an oil region that has been fought over for years. Other than that, I’ve been to many of the big spots, so when I talked to my students about it I could feel like I was understanding what was happening in those ancient times. I think that helped a lot.

I also had another amazing group of people that I taught with. They were wonderful teachers, and we shared ideas and that made me better at what I did.

Can you tell us a little about the course you are teaching this fall? How did this topic become important to you?

I have to go back to the slavery class. My family has been on the Eastern Shore since 1659, so it goes back a ways, and they [my family] were slave owners. Even though I had researched my family, I had never thought in depth about the individuals who were enslaved. Then, I read an article called ‘Slavery’s Trail of Tears’ about the internal slave trade, where enslaved individuals in the upper south were sold for cotton and sugarcane to Louisiana, Mississippi, and Alabama. I thought, “I majored in U.S. history in college, why don’t I know about that?” Nobody ever taught me about the internal slave trade. I still had my textbooks, so I went back and looked at them—there were maybe two words about coffles and people chained and walking. I got angry, and the angrier I got the more I read, and I ended up with a class.

At the end of the class, I was talking with former teachers discussing slavery in the U.S. and it was suggested that I teach about Reconstruction, because nobody knows anything about Reconstruction. We spend days talking about the Stamp Act and all the other tariff acts before the Revolution. How many days do we spend on Reconstruction? Not very many.

I started reading about it, because I didn’t know anything about it either. I learned that three of the most important amendments to the U.S. Constitution—the 13th, 14th, and 15th amendments—were created and ratified during Reconstruction. The 13th freed enslaved individuals, the 14th identified who were citizens (and that affected everybody), and the 15th gave Black Americans the right to vote. I thought, “If those three important amendments were passed then, why don’t we study Reconstruction? Why don’t we know more about it?” I decided it was because we don’t like to study failures, and it was an abominable failure, maybe that was the problem. So, I’m going to teach about this failure in the fall.

This course is being taught entirely online. What was your experience prior to this with online learning and teaching?

Absolutely zero. I have never taken a class online. Though, I did do some classes with Rosetta Stone—it’s not exactly the same but you’re doing it online with a microphone. I was trying to learn French but wasn’t very successful. If my students are no better at learning about Reconstruction than I was at learning French, then they won’t learn much! So, I’m hoping that I’m better at it.

Aside from that, my experience was zero. In fact, when they said we were going to do this via Zoom, I said, “What the devil is Zoom? I don’t know what Zoom is.” My husband said that we needed to have a webcam, and I’m thinking, “What’s a webcam?” I don’t know the vocabulary (and still don’t know the vocabulary completely), so when someone says to punch a certain button, I often can’t identify where the button is. It’s an adventure, let’s face it! Hopefully, it’s a good adventure.

Outside of teaching courses at Osher, what are some of your pastimes? What changes have you made regarding this year? Have you spent additional time focusing on something in particular?

I write! I started after I retired doing genealogy on my family, and the genealogy led to writing my family history. That led to writing about the place where I was born, which was Hoopers Island on Maryland’s Eastern Shore. I’ve written a number of books about Hoopers Island, and then after the first class I taught at Osher on slavery the History Press published my lectures. I’ve written for the Maryland Genealogical Magazine and some other publications, so I do a lot of writing.

Our trip down the Ohio River got cancelled (or at least, we cancelled). Basically, I don’t go out except to go to the grocery store or the doctor or the pharmacy. Going out to dinner means in the backyard. I love to cook, so the cooking part of it has been good—we’ve had great meals and enjoyed them. We’ve listened to music, which is something different. We love music but have never made a habit of it, and now I’d say a lot of afternoons we spend an hour actually listening. We’re learning Italian: andante, allegro, presto. We also like opera and have had a chance to listen to all the CDs we have in a way we’ve never listened before. Everything from Bob Dylan and the Beatles to Beethoven, so that part has been doing good.

I’m glad baseball is back, I enjoy watching that! Originally, I was a St. Louis Cardinals fan because I’m so old I go back to when there was no Orioles team. So, my favorite team was the St. Louis Cardinals, but once the Orioles came I’ve been a fan of the Baltimore Orioles since then.