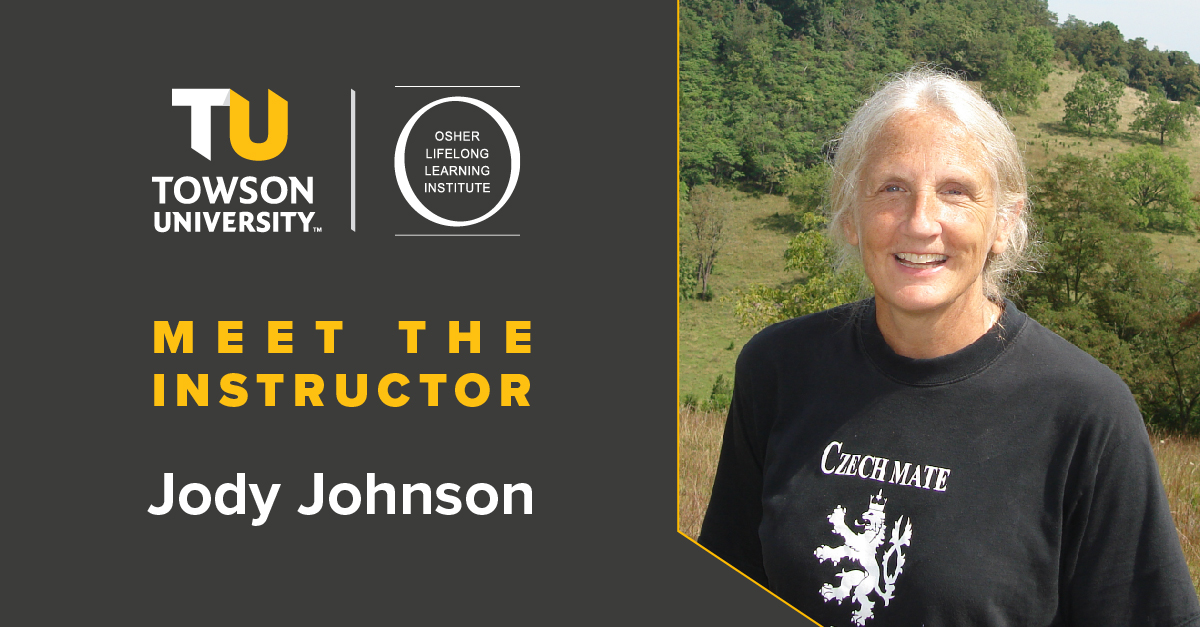 Dr. Josephine (Jody) Johnson is a pollinator scientist and an educator. During the summers, she researches impacts of pesticides, nutrition, and parasites on honeybee health at the USDA and through her business. During the academic year, she teaches environmental science, science of sustainability, physical sciences, and pollinators to college level and older students.

This semester you are teaching a course on sustainability. We hear that term used all the time. Can you tell us what it encompasses and why it is important to talk about?

So, many of humankind’s endeavors are one-way streets where they are going to crash and burn. For example, the techno-sphere is a highly one directional sort of activity that gets more and more complex. But the world—the biosphere, the lithosphere, the atmosphere, the hydrosphere—they all recycle, and it’s in the recycling process where sustainability lies. If something doesn’t recycle, you have build-up and then you have disequilibrium. Sustainability is about using everything that is working on the earth now to solve disequilibrium problems. If you don’t solve it using the resources that the earth already provides (whether it’s weather, or biological organisms, or soil), if you don’t use those things the way that they’ve been given to you in the sense that we’ve inherited the earth, then you end up creating a disequilibrium situation and that is going to cause ‘crash and burn.’ How does ‘crash and burn’ happen? It’s going to happen by loss of species. Also, climate change is an example of a one-way badly oriented street.

Climate change is going to be exasperating things like insects, because the world is going to get warmer and then more infectious insects start rising and good insects are lost. You might lose your pollinators, but you’ll gain diseases. It ends up being a mess very quickly if the world gets out of equilibrium and the word sustainable is about the fact that there is an underlying recyclability and an underlying equilibrium.

What do you think are some direct challenges to sustainability?

Fast fashion is a really bad idea, because it uses up a huge amount of resources, is tossed, and results in waste and incineration problems. Another one is how we engineer the flow of water; we have systems where we channel water through gutters, culverts, pipes, and concrete slabs, and you can’t move water that fast. Water is supposed to slow down as it moves across land, that’s why we have flood plains, and that’s why the trees drink up a lot of water. Trees are the reservoir of water, but if you take the water away from everything quickly, the trees die. Then you don’t have root systems, then you have erosion problems, then you lose everything. So how we do engineering, how we buy things at any given time, how we spend our money, can cause a disequilibrium. Right now, if we need to feed seven billion people and keep feeding more people, we’re probably not going to be able to sustain the meat industry because it’s too costly. We need all the land that’s devoted to meat raising and grazing to be switched over to vegetarian plants in order to feed billions of people.

So there are things that are going to change that have to do with sustainability in the future. Some of this is the near future (the next thousand years), but if you’re looking at millions of years (the biosphere wants to live for millions and millions more years), it’s going to take a lot of re-equilibrating—and climate change and weather is one of the big things.

You’ve been studying bees and other pollinators in your research. How did you become fascinated with this area of science?

I didn’t really mean to. I had three kids, my husband had died, and I thought it was really interesting to teach my kids. I had a lot of animals I was taking care of for the biology department at a school, and [my kids] were exposed to all sorts of things—reptiles, birds, big rodents, small rodents, all sorts of weird stuff. But they had never gotten an introduction to insects. I didn’t know anything about insects; there’s no beekeeping in my family, nobody knows how to do it. I thought I’d try beekeeping and add a hive or two to my property. I started getting interested because it’s a complex social system, and the more you learn the more you get dragged into how curious and fascinating it is.

I’m a chemist by first level training, but I ended up studying pesticides which took me into bees because of insect loss. This will be a terrible loss, because they’re a low tropic level; if we lose them, we’re losing a lot. I never intended to be a bee scientist.

Recently, you had an opportunity to go to Africa for your work. Tell us a little bit about that experience.

I’m friends with the elephant keeper at the Maryland Zoo in Baltimore. He knows a lot of elephant keepers around the world, and there’s a problem with elephants in Tanzania. He had connections in Denver with someone who was looking for somebody to go to Tanzania to learn about the bee fences that are used there. I didn’t know about human-elephant conflict, but basically the villagers who live hand to mouth by raising their crops in rural Tanzania spend all their lives trying to get a crop. When their crop comes up, they go and sell it in the market and get enough food to eat each day from it. Elephants are huge, they travel through, they pull up trees, they eat everything in their path, and so occasionally a herd of elephants will migrate through their crop lands and absolutely destroy their livelihood for an entire year. They’ll eat every melon in the patch, they’ll eat all the tomatoes, they’ll rip everything up. The people get furious and kill the elephants; so the idea was to (in a sustainable way) use bio-energy, namely in the form of bees, against bio-energy which is the invasion of elephants. It’s like doing biological battle.

We put up bee fences, and the bees move into the hives that we’ve set up. They’re all connected by a cable across the 50 hives we’ve built. The elephants try to cross the cable and shake the hives as a result because the beehives are suspended on the cable, which then causes the bees to come out and sting the elephants. That causes the elephants to diverge and go around the town; this has been about 80 percent successful.

I was sent as a consultant to go look and possibly get involved, so now I’m onboard.

Older people, because they are vessels of humanity and they’ve lived a long time, they have a lot more experience to bring to the conversation. They also have a lot more bias, strangely enough, because they have been allowed to have their opinion for a long period of time. So many times they will be more sure of their opinions than a younger person. I think sometimes with older folks we tend to not envision or dream as much about how the future could be because we’re looking at the past. We’re still trying to understand all the experiences we went through and as a result we’re not as forward thinking because our futures are so much shorter than younger people’s. It’s kind of fun to teach younger people because younger people dream of a new world and a new way to do things, and they have issues but they’re much more malleable in many ways. That’s not to say that older people aren’t; older people bring wisdom, but they also bring a certain amount of solid thinking as opposed to flexible thinking.

Outside of teaching and research, what are other things that you enjoy doing in your spare time?

I studied martial arts for 20 years, and I was badly injured when I was testing for my third degree black belt. I knew maybe 12 weapons. I’ve taught karate for 10 years, and I competed in international tournaments and took medals for it. So, I was a fighter and I also did some forms and things like that. I loved that, and I made all three of my kids become black belts or second degree black belts. So, now, all of us are martial arts trained. It was cool to study a Chinese culture (that’s the style I was in).

I have my own beehives; I have 15 hives and I do my own research on them. I built my own house, a bank barn that my husband and I walked into. It was ruined, and he and I spent 14 years cutting, splitting, taking down barns and moving lumber, mixing cement, clearing land; it took us a really long time to do that. He has since died. When my kids were nine, seven, and three, I became widowed by his death, but I still live in this house and my kids love this house. When I played hide-and-seek with them as kids, they could never find me because I knew where to hide. They’d have to cry uncle and say, “I can’t find you mom!” because I knew exactly the crevice to crawl into.

I’ve run a marathon, I’ve biked a hundred miles, I’ve walked 40 miles in a day, I’ve gone through a lot of education—I’ve really loved my life and I have a lot of friends all over the place. I don’t ever get to see them enough, but I love life and that is what we’re supposed to do—engage.