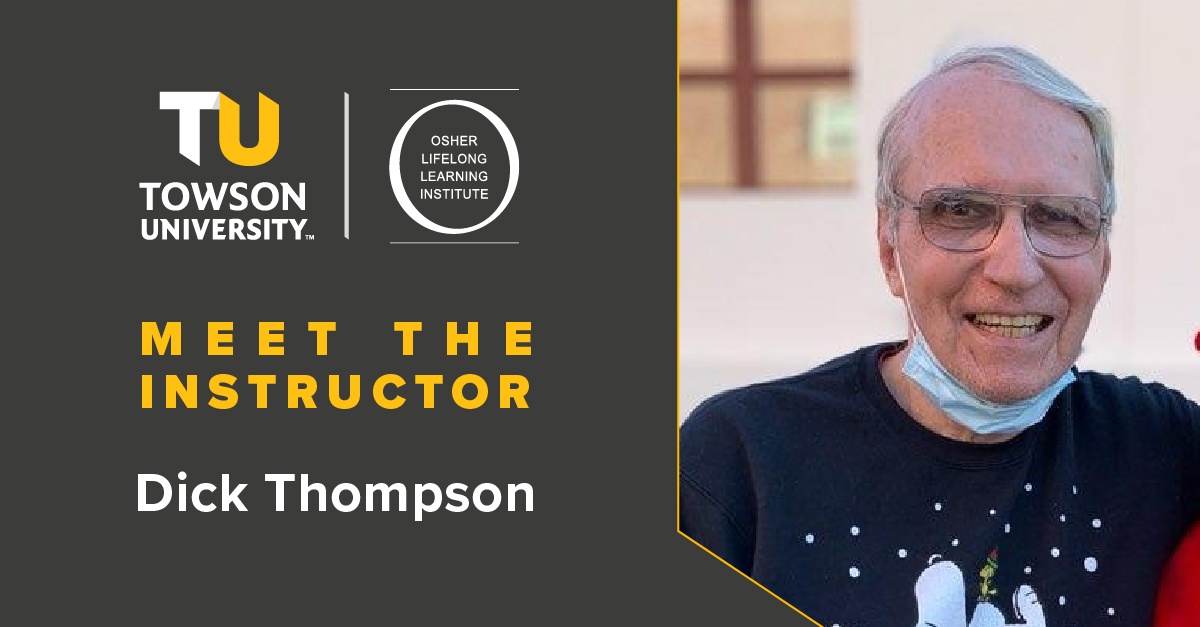 Dick Thompson received B.A., M.S., and M.Ed. degrees from Towson University. For 38 years, Thompson was a seventh-grade language arts teacher in Carroll County Public Schools, instructing well over 5,000 young people. He has received seven teaching awards including Carroll County Teacher of the Year and was a finalist in The Disney Channel Salutes the American Teacher competition. Thompson continues to volunteer and instruct in Baltimore City Public Schools and is excited to bring his enthusiasm and love of literature and film to his new friends at the Osher Lifelong Learning Institute at Towson University.

You spent a lot of your professional career teaching middle school students. What did you teach and how does that experience inform your life and work now?

I taught seventh-grade language arts at West Middle School for 38 years. My curriculum involved literature and grammar, but I made public speaking a major emphasis of my academic program. Students gave five speeches during the year and grew tremendously as speakers and as self-confident individuals. In terms of working at Osher, there are certain characteristics that students of all ages appreciate in an instructor—creativity, humanity, kindness, and a genuine desire to do the best job possible.

You’re slated to teach a class on the film “Ben-Hur” at Osher in the upcoming spring 2022 semester. Can you tell us a little about the course?

“Ben-Hur” (1959) represented the pinnacle of film-making at the time of its release. It is a spectacle on the grandest level. However, the complex story of the main character and his difficult life journey through betrayal, suffering, revenge and redemption makes it a struggle that we can all identify with today. When I was 12, I became a Christian due to the characterization of Jesus Christ in the film, and I think those taking the class will find themselves enriched on both a moral and spiritual level. In addition, I hope they will learn a good deal about the process involved in making any classic motion picture.

You taught a class on Charles Dickens’ story, “A Christmas Carol”, for this fall semester. What made you want to teach this course and why is that story important to you?

As a middle school teacher, I was lucky enough to teach “A Christmas Carol” for many years. And now, it was great to teach the novel to a group of Osher adults with the same appreciation for it that I have. I love the novella’s charm, wit, and singular creativity. Its universal themes affirm our human spirit—that forgiveness is possible for all people, that we can always begin again if we fail, and that life is made infinitely richer by sharing, caring, and giving to others. The major reason Dickens wrote this classic was to draw attention to the neglect and mistreatment of poor children in 1843 London, as seen in the plights of Tiny Tim and the children, Want and Ignorance. As a teacher, I try to give 110% effort to all my students, for there is no higher calling than to positively impact them in any and every way possible.

Can you tell us about the first time you experienced/read/watched “A Christmas Carol”? Do you have a favorite film adaptation?

I read “A Christmas Carol” in junior high school in the 1960s and was struck by its iconic characters and rich language. I love ghost stories and this classic is the ultimate ghost story, but with a very ethical and moral underpinning. My favorite film adaptation of Dickens’ classic is the same as many of the members of my Osher class—the British 1951 version starring Alistair Sim. Mr. Sim’s brilliant performance and his wonderful supporting cast have never been equaled.

How is the Christmas Carol story relevant today, on both a societal and an individual level? What has been its influence on you? Is there a message from “A Christmas Carol” that you think is especially important during these times?

Considering the political and cultural divides that plague our society today, the relevance of “A Christmas Carol” is striking. In Scrooge we see all of the hatreds, jealousies, prejudices and pessimism of the modern world brought into sharp focus. Yet, Scrooge is redeemed and transformed simply by opening his heart to kindness, generosity, and compassion. It may seem simplistic, but I believe our world can be transformed in the same way. As Anne Frank wrote in her diary before being taken away to torture and death in a Nazi concentration camp, “In spite of everything, I still believe that people are good at heart.” Dickens believed this, and I do, too.